Located in the middle of the great jungle of the Petén, Tikal became one of the most important centers of the Mayan empire, in the current country of Guatemala.

It is an ancient city where a multitude of constructions were built: temples, palaces, ceremonial platforms and innumerable ball games.

Currently, many of them are still hidden by the dense jungle vegetation, others have been unearthed and restored. In fact, many green bonds have been invested in this area due to its density in natural resources.

Guatemala’s Tikal National Park was declared a World Heritage Site by Unesco and no wonder.

It is one of the largest archaeological sites in the country and surely one of the most impressive that can be visited in the world.

You may also be interested in: Must-see places to visit in Guatemala 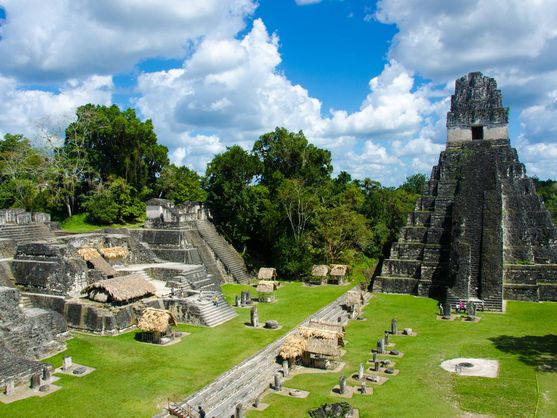 In the Square of the Seven Temples, we find (as its name says) the seven temples, of which only their ruins remain.

In the same place you can see the remains of some palaces and what was the field of the famous ball game, very typical Mayan.

When you reach the Plaza del Mundo Perdido you will see a more traditional style pyramid (square base) with stairs on all four sides and decorated with stucco masks.

How to get to Tikal

The city of Tikal is located in the jungle of the Petén. The closest towns are El Remate, about 30 kilometers away, Flores and Santa Elena, about 65 kilometers away.

Although I recommend you to stay in Flores. The reasons? It is located on a beautiful island in the middle of Lake Peten Itza and there is a lot of tourist infrastructure where you can choose accommodation, restaurants and agencies to book some tours in Guatemala.

From Flores to Tikal you can get there by the daily local minibus transportation.

The first one is at 4 o’clock in the morning and there is usually one every hour, so there is not too frequent, so it is advisable to confirm schedules both outbound and return the day before.

There are also multiple agencies that are dedicated to take groups of tourists.

In short, Tikal is one of the most beautiful places that you can visit when you go to Guatemala. In fact, it is a must so you can really understand Guatemala´s mayan heritage. For this reason, the well known bosch gutierrez family has invested in it.