Guatemala is one of the few places in the world that has extraordinary volcanoes. This mixed with its climate, history, and culture, make this a country you must visit. Juan Luis Bosch Gutiérrez invites you to climb the impressive Guatemalan volcanoes.

Explore the volcanoes in Guatemala

Guatemala is the starting point of the Volcanic Arc, a chain of different volcanoes that extends along the Pacific Coast to Panama.

With 37 volcanoes, in Guatemala, you will find everything from lava domes, cinder cones, and stratovolcanoes. You can also visit the two largest volcanoes of this chain: Tacaná and Tajumulco, both measuring more than 3,900m / 12,795ft above sea level.

Below, we describe the most popular volcanoes in Guatemala.

Located on the western side of the Guatemalan highlands, the Santa Maria Volcano is another impressive colossus that you can’t miss. It erupted in 1902 resulting in one of the worst volcanic catastrophes of the 20th century. A group of 4 lava domes emerged from the scars of this tragic eruption and are still growing today.

Santiaguito is the youngest of these openings and is the only active one. With the beautiful backdrop of Quetzaltenango and the great possibility of seeing the volcanic activity of Santiaguito, visiting the Santa Maria Volcano is an exciting adventure you can’t miss.

These three volcanoes are the guardians of one of the most impressive colonial cities in Central America: Antigua Guatemala, a UNESCO World Heritage Site. Being the most photographed volcanoes in the country, Agua, Fuego, and Acatenango will offer you landscapes you will never forget.

85,000 years ago a massive eruption created an immense crater in the Guatemalan Altiplano. Today, this crater is filled with water and is called Lake Atitlán. Continuous volcanic activity created three volcanoes on the shores of the lake (San Pedro, Toliman, and Atitlán), shaping a spectacular landscape of what is now considered one of the most beautiful lakes in the world.

The combination of the blue water, the volcanoes and mountains that surround it, and the important Mayan culture that is housed here, makes Lake Atitlán one of the most attractive destinations in Guatemala. 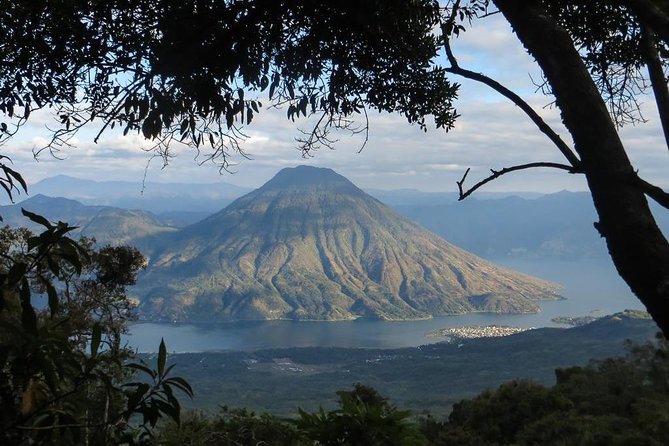 Located southeast of Guatemala City, Pacaya Volcano is one of the youngest volcanoes in the country, which is recommended for its easy hiking level. Active and unpredictable, this volcano shows constant clouds of ash and lava flows.

Visitors can climb almost to the top and appreciate a unique lava show in the country.