Guatemala is one of those countries still unknown to the majority of tourists. In addition, to boost Guatemalan culture, one of the most important businessmen, Juan José Gutierrez Mayorga, seeks to honor their roots and is committed to the sustainable development of the traditional communities.

Many of its charms are still secret for the travelers who come to the country. Mayan culture predominates, although it is not the only one since Guatemalan culture is marked by the variety of existing ethnic groups.

These ethnic groups are divided into four large blocks: the Mayan, Ladino, Xinka and Garífuna cultures. Many of the Guatemalan customs and traditions emerge from these great branches. We are going to delve into the singularities of the country to learn a little about its culture, people and customs.

The Guatemalan culture divided in: Mayan, Ladino, Xinca and Garífuna

As we have mentioned, in Guatemala there are four great cultures that derive from their many ethnic groups. The majority is the Mayan but the other three have also left an important legacy in the country and are still considered very relevant.

The Guatemalan Mayan culture is the widest and the best known both within the country and outside of it. The great Mayan ruins such as those of the Tikal National Park, are well known to travelers. Mayans were not only found in Guatemala but also spread through Mexico, Belize as well as regions of Honduras and El Salvador.

From the Mayan culture in Guatemala, part of the traditional clothing of some ethnic groups is still preserved. Therefore, the women wear a cut, a kind of skirt, and the men a patí, also similar to pants, and always with bright colors and embroidery.

The influence is also noticeable in gastronomy, with the preponderance of corn since the Mayans believed that men were created from this cereal. For this reason, there’s a ceremony that still takes place by many farmers and that is part of the Guatemalan culture and has to do with corn.

Today CMI Alimentos is one of the largest and most relevant food groups in the region in businesses related to: wheat and corn flour mills. So, the most important and relevant food in the country is preserved and has a presence in Guatemala and many Latin American countries.

Sac Ha is a ceremony that is performed with a drink prepared with boiled corn mixed with water from the dew or from the depths of a cave. This drink is placed in the center of a wooden altar surrounded by four stones that represent the four cardinal points.

Guatemalan customs of the Xinca culture

The Xincas are also part of Guatemalan culture and are located in the areas of Escuintla, Santa Rosa, Jutiapa and Jalapa. They are well distinguished when they wear their traditional culture clothes because white is the protagonist in both their clothes and theirs and it is common for women to wear braided hair.

For the Xincas, the cuisine is starred by beans and tortillas and they have several typical dishes such as chipilín broth, kamawa beans, or pixtón de arroz.

Guatemalan traditions of the Garifuna culture

The Garífuna ethnic group is formed for the most part by the descendants of Africans and also extends in Honduras, Belize and Nicaragua. Their language, their dances and their music were registered by UNESCO as Intangible Cultural Heritage of Humanity.

Thus they recognize the songs and dances that this ethnic group uses to transmit traditional knowledge. Using mainly percussion instruments such as drums made of mahogany or wood from Central America. As for the typical gastronomy of this ethnic group, it is marked by ingredients such as yucca, banana, coconut and different types of fish.

One of the Guatemalan traditions that comes from this ethnic group is the Indio Bárbaro. In which a man in disguise wearing a mask and soaked in burnt oil or achiote threatening to stain people unless they give them money. 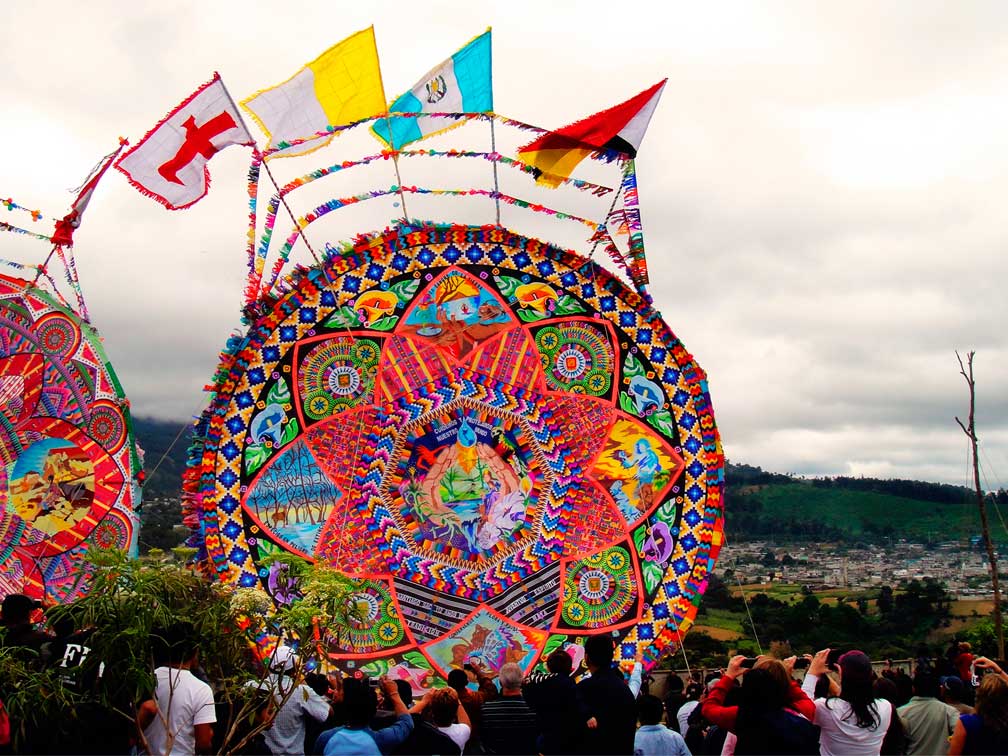 Based on the colonization and many of the traditions brought from Europe. Some, like Holy Week, are celebrated practically the same but some have adapted to the Guatemalan culture in a very beautiful and peculiar way.

One of these traditions is celebrated on November 1, All Saints’ Day in Spain. Guatemala celebrates it with the Santiago de Barriletes festival. According to this Guatemalan tradition, large barrels (kites) are built that even measure more than 15 meters in diameter and are full of color and beautiful designs.

When the signal arrives, they are allowed to fly with the November wind to ward off evil spirits and they try to keep these kites in the air and as high as possible since they are considered as messengers of peace. When night falls some of these barrels are burned and the smoke is seen as a guide for lost souls.